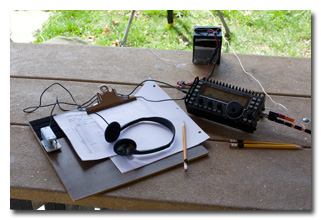 Eric arrived at Tom Jenkins Dam about 1730 UTC and quickly set up his station in the picnic shelter. Eric was testing the station he plans to use during his aggressive activation of D.C.-area NPS units April 5 through April 8. This station consisted of his Enhanced KX3 Travel Kit carried in a LoweProwe Traveler 150 photo-backpack, his MFJ-1910 33' fiberglass telescoping mast and tripod carried in a military antenna-bag, and a custom clipboard. Eric brought no other equipment with him for this activation and was pleased to verify that the two bags did, indeed, contain everything required to succeed in activating the NPS unit. 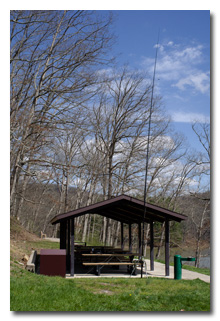 Eric very quickly erected the 33' mast and used it to support his 28' end-fed wire antenna with three radial wires. The KX3 station was deployed just as quickly.

Eric's first QSO was with W4NE at 1754 UTC and he made QSOs steadily until he deemed it was time to quit with twenty-four QSOs at 1830 UTC. All QSOs were made on 40m CW at the 5-watt power level. No other bands were attempted for this activation.

The weather wasn't as nice for this activation as it could have been but it also could have been far worse. The temperature was about 66° and the wind about 15mph with gusts to 29mph. Fortunately, the rocky outcropping adjacent to the picnic shelter at Tom Jenkins Dam shielded Eric from the worst of the wind and he was able to stay relatively comfortable.