Three members of the Southeast Ohio Radio Adventure Team succeeded in activating North Country National Scenic Trail as part of the ARRL's yeal-long National Parks on the Air (link). Eric McFadden, WD8RIF; Miles McFadden, KD8KNC; and Andy Young, KD8WVX traveled to Tom Jenkins Dam in Burr Oak State Park to activate the North Country National Scenic Trail, TR04 (link). The trio was joined by Eric's wife, his daughter, and his daughter's friend for an Easter picnic at the park as well as by Andy's three-year-old daughter.

Eric and Andy—and everyone else—arrived at Tom Jenkins Dam about 1615 UTC and proceeded to set up their stations. 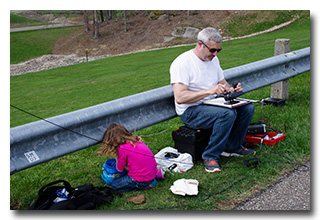 Eric and Andy tried to put physical distance between their stations in order to minimize interference during same-band operations. Eric operated in the picnic shelter which is located directly on the Trail. Andy operated at about the midpoint of the actual Tom Jenkins Dam, a point that is also directly on the Trail. This physical separation did, indeed, reduce same-band interfence compared to that experienced during the February 28 and March 9 activations. Eric and Andy operated using their own callsigns; Miles didn't operate but, as is his modus operandi, he helped with setup and with cooking for the picnic.

Andy's station consisted of his Kenwood TS-480sat and his Buddipole antenna system. Andy operated SSB at 100-watts and got his power from Eric's Honda generator. Andy concentrated on 20m and 40m and, because of the CQWW WPX SSB contest underway at the same time, had to work hard to make enough QSOs to qualify the activation. 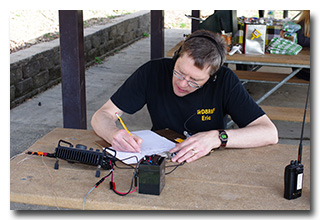 Eric's station consisted of his Enhanced KX3 Travel Kit and he used his MFJ-1910 33' fiberglass mast to support his 28' end-fed wire antenna. For this activation, Eric used three counterpoise-wires instead of the two wires he has used in the past. Eric powered his station with a 5Ah gel cell which he float-charged during use with one of his Powerfilm (link) FM15-300 5-watt folding solar panels. Eric was able to easily make the ten required QSOs; he ended his operation with fourteen QSOs on 40m which he made in just about half an hour.

A highlight of Eric's operation the two-way NPOTA QSO with N2CX who was activating First State National Historical Park (HP12). This QSO was Eric's first QSO of this activation—a fine start to the operation.

The weather couldn't have been much better for operation of this sort: sunny and 74°F with just a bit of a breeze.

One of Eric's goals for this operation was to test the equipment and the packing of the Enhanced KX3 Travel Kit, mast, and tripod which he hopes to use during his upcoming attempts to activate Harpers Ferry National Historic Park + Appalachian Trail National Scenic Trail (two-fer) and Chesapeake and Ohio Canal National Historical Park + Appalachian Trail National Scenic Trail + Potomac Heritage National Scenic Trail (three-fer). Eric was very happy to demonstrate that everything he should need for these activations—including the 33' mast and tripod and a 5-watt solar panel and charge-controller—will fit into his Lowepro Traveler 150 photography back-pack (link) and a military-antenna shoulder-bag. The only item he should need to carry separately to the two-fer and three-activations is his custom clipboard.