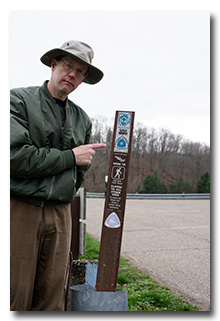 Eric arrived at the location about 1830 UTC and chose to set up in the picnic shelter that is located right on the Trail. Eric set up his KX3 Travel Kit on a picnic table and supported his 28' end-fed wire antenna with his MFJ-1910 33' fiberglass telescoping mast.

Eric began calling "CQ" first on 40m, then on 20m. No replies his calls were heard until 1916 UTC when WN4AT answered Eric's call on 40m. Eric worked three more stations on 40m over the next ten minutes and then he worked nothing for the next forty minutes. Finally, someone must have posted Eric to the spotting network because between 2008 UTC and 2034 UTC Eric worked nineteen stations on 40m. No QSOs were made on 20m.

The weather was marginal for a comfortable outdoor activation. The temperature was about 43°F during the operation. Eric did discover he was able to accurately use his AME Mini-B paddle (link) while wearing gloves, a result he hadn't been expecting.