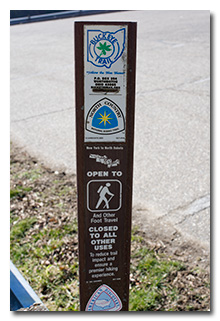 After a site-survey the day before, Andy and Eric decided to set up in the picnic area adjacent to the trail head. This picnic area provided many picnic tables and numerous trees from which to hang antennas. (The site-survey had revealed a second possible location actually on the trail. Perhaps this other location might be used for a subsequent activation.)

The trio arrived on-site about 10am. Andy quickly suspended a borrowed 10m-40m trap dipole from a very nicely-placed branch and set up his Kenwood TS-480sat transceiver. Eric's quiet 2kW Honda inverter-generator was used to provide power for Andy's 100-watt rig.

Eric spent an inordinate amount of time trying to get a line into a tree but finally succeeded in hanging his 44' speaker-wire field doublet. Midway through the activation, the string supporting one of the doublet legs slipped from the end-insulator and Eric deployed his 28' end-fed wire to use in place of the doublet. Eric's station was his KX3 Travel Kit powered by a 5Ah gel-cell with a 5-watt solar panel charging the battery. Eric had bought four additional gel-cells and his NiMH battery pack but none of these were needed. Having spent the previous two years using first a bug and a sideswipers/cootie-keys, Eric had great difficulty using the KX3's electronic keyer and ended up using the KX3's memory-keyer to call CQ and his Vibroplex bug to to complete the QSOs. 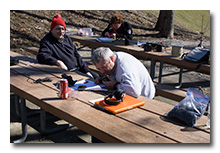 Using his own callsign, Andy commenced SSB operations while Eric was struggling to hang his antenna and quickly generate a significan pile-up. Andy very quickly achieved the ten QSOs required to make an accredited activation and by the end of the operation, Andy had worked 118 stations on 40m, 20m, 15, 10m, and 2m. One station each was worked on 15m, 10m, and 2m and the rest were about evenly split on 40m and 20m. Ted Jacobson, W8KVK, has generated a geocoded map of Andy's QSOs (link). Note the 20m contact with North Pole, Alaska.

Eric also managed to generate a couple of pile-ups as the activation progressed but his QRP CW signal didn't generate the interest that Andy's 100-watt SSB signal did. Still, Eric managed to achieve an accredited activation by working 41 stations, all on 20m except for one on 40m and one on 2m. Jean Charron, VE2JCW, sent Eric a recording of Eric working through a pile-up as heard in Quebec (link). 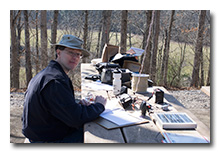 Eric quickly discovered that he couldn't operate the same band as Andy—even the KX3's excellent receiver couldn't reject Andy's 100-watt SSB signal when Eric was in the CW sub-band. This issue was reduced somewhat once Eric switched to the 28' end-fed wire antenna.

Miles didn't operate but helped tremendously during set-up and tear-down and also cooked a nice lunch.

Except for the blustery winds, the weather was just about perfect for this activation. The temperature was in the high 40s during set-up and quickly rose to the mid-60s as operations commenced. It did not at all feel like a February day in Ohio.

Both Eric and Andy are excited about the possibilities for future activations, of North Country National Scenic Trail (TR04), and of Dayton Aviation Heritage (HP11), and maybe even of other Ohio NPS units.