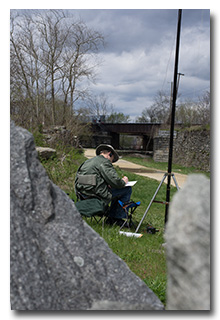 The drive from downtown D.C. to Harpers Ferry, where Eric and Miles were to cross the Potomac River on foot to access the site of the three-fer, was through hard, driving rain. Fortunately, by the time the duo had arrived at Harpers Ferry, the skies had cleared, the sun had come out, and the rain had completely stopped.

After stamping their National Park Service Passport 2016 and speaking with the ranger—who couldn't have been more helpful— at the Harpers Ferry Visitor Center, Eric and Miles grabbed their gear and took the shuttle bus to the Lower Town. From Lower Town, they carried their gear— the Enhanced KX3 Travel Kit, an MFJ-1910 33' fiberglass telescoping mast and tripod in a military antenna-duffle, a custom clipboard, a folding chair, and two folding camp-stools—across the Potomac River along the Appalachian Trail into Maryland. Eric and Miles found a flat, wide space not far from the bridge to set up the station. (The NPS brochure about Harpers Ferry National Historical Park quite clearly shows that this section of trail includes all three NPS units.)

Eric and Miles quickly erected the 33' mast and used it to support the 28' end-fed wire and they deployed the three counterpoise-wires. Eric operated while sitting in the folding chair and his KX3 sat upon a folding camp-stool.

Eric's first QSO was with W9RF at 1646 and he made QSOs steadily until he finished with eleven QSOs at 1659. At this point, the skies were looking threatening again so it was decided to tear down and proceed back to Harpers Ferry for the activation of HP14. Eric had anticipated that the very nearby Maryland Heights would block signals from the south and this did, indeed, turn out to be the case. Eric operated only on 40m CW.

The weather wasn't ideal for an outdoor operation but at least it wasn't raining. The temperature approached 60° and the sun was out. The main problem was the wind. In fact, the gusty wind caused the MFJ mast to bow so much that three sections delaminated and now need to be replaced.

This three-fer activation was the most strenuous activation Eric had planned for this D.C. trip. While the walk across the Potomac along the Appalachian Trail turned out to be almost trivial, Eric did find it a challenge to carry both the Enhanced KX3 Travel Kit in the Traveler 150 backpack and the military antenna-duffle—the duffle was akward and heavy and kept falling from his shoulder. Eric was glad he hadn't had to walk much further than he did with the awkward load.