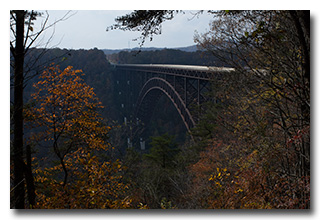 This operation was intended to be the second leg of the three-activation West Virginia Rivers RATpedition group-activations by the Southeast Ohio Radio Adventure Team. The original plan was for several SEORAT members to together travel to Gauley River National Recreation Area (RC09), New River Gorge National River (RV03), and Bluestone National Scenic River (WR02) over a weekend to perform activations. However, due to financial and time constraints, this plan fell through and Eric and Miles found themselves doing the RATpedition alone over what turned out to be a very long day-trip. 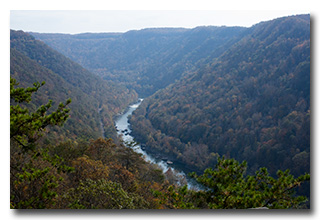 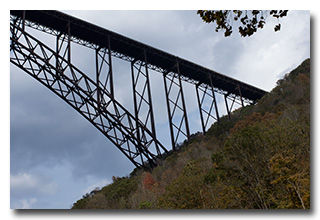 Eric and Miles followed the first half of the achingly-scenic Fayette Station Auto Tour (map, PDF), as it descended into the New River Gorge along numerous switchbacks and cuts, to the Fayette Station Bridge. Just prior to this bridge, they found a CSX Maintenance of Way (MoW) crew working on the CSX railroad line on the eastern side of the New River. As they crossed the Fayette Station Bridge, out the left side of the car they saw three adult Bald Eagles cavorting just above the water—a good sign that even if the activation were to prove challenging, the scenery would make up for it. Once at the Fayette Station boat-ramp, Eric and Miles did a bit of a walk-about, enjoying the natural scenery and the sight of the massive New River Gorge Bridge looming almost directly above them, while they tried to select the best place to set up and attempt to launch signals out of the deep Gorge. Eric eventually chose to set up at the Fayette Station Day Use Area, which included a nice space to set up the station within 100' of the river, a requirement for an NPOTA activation of a National River. Eric and Miles quickly set up the station and Eric was on the air by 1844 UTC. 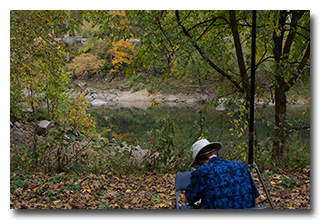 Eric began operations on 20m and his first QSO came almost immediately at 1845 with WB0KIU, and Eric became hopeful that he could get a signal out of the Gorge. However, over the ned fifteen minutes Eric was able to make only one more QSO on 20m, and Eric began to despair of meeting success at this location. Eric switched to 40m and his first QSO there came at 1908 UTC with N3BJ. It took ten frustrating minutes to make a second QSO on 40m but then a run started and Eric made 31 QSOs over the next 35 minutes. Eric made his 36th and final QSO at 1952 UTC with KC8GE. All of Eric's QSOs were CW made at the 5-watt level.

Highlights of the activation were the gorgeous fall scenery and the sounds of the flowing river; a QSO with fellow SEORAT-member K8RAT; a park-to-park QSO with fellow SEORAT-member K4SWL at the Blue Ridge Parkway, PK01; a QSO with N8XX, and seeing a CSX freight train pass by on the tracks on the western side of the river, just a 100' or so behind Eric, and about 15' higher. (The train was so loud that Eric couldn't hear his radio in his headphones until the locomotive had passed away to the south. "Low-lights" of the activation were the hundreds of midges that insisted on massing near Eric's face during the operation; these were annoying but didn't prevent ultimate success.

Miles did not operate but helped with set-up and tear-down and he did most of the activation photography.

After tear-down, the drive up out of the Gorge along the second half of the Fayette Station Auto Tour was as scenic as the drive down. 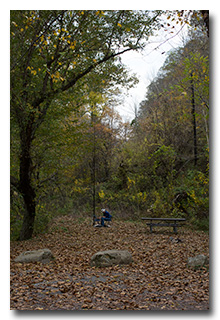 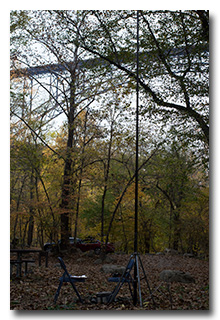 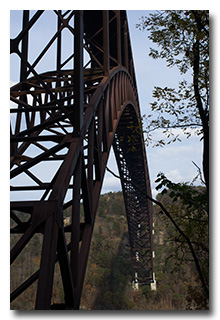