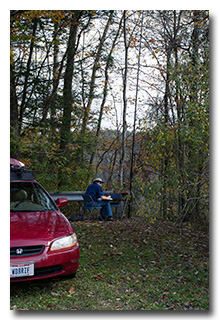 This operation was intended to be the first leg of the three-activation West Virginia Rivers RATpedition group-activations by the Southeast Ohio Radio Adventure Team. The original plan was for several SEORAT members to together travel to Gauley River National Recreation Area (RC09), New River Gorge National River (RV03), and Bluestone National Scenic River (WR02) over a weekend to perform activations. However, due to financial and time constraints, this plan fell through and Eric and Miles found themselves doing the RATpedition alone over what turned out to be a very long day-trip.

After a long drive from southeast Ohio, Eric and Miles arrived at the Gauley Tailwaters at about 1555 UTC, stopping at the park sign to snap a proof-picture, and then continuing on the parking area Eric had chosen based solely on Google Maps images. Fortunately, the area turned out to be ideal for a low-profile operation—high and in the clear, with sufficient space for setting up the station—and Eric and Miles quickly set up the station and Eric was on the air by 1607 UTC. 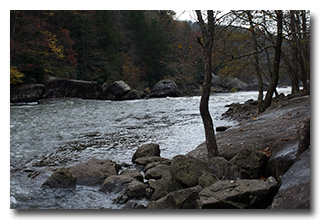 Highlights of the activation were QSOs with N8XX and with fellow SEORAT-member K8RAT.

After tearing down the station, Eric and Miles continued down the road to view the river and Summerville Dam at the Tailwaters Campground and boat-ramp.