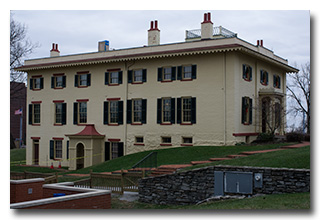 Upon arriving at the park, Eric and Tom spoke with the rangers and Eric stamped his Passport 2016. The trio was given permission to set up in the overflow parking area behind the historic Taft house and Education Center. 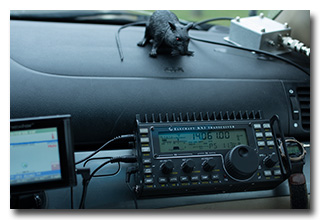 As at previous activations, Eric's station consisted of his Enhanced KX3 Travel Kit, his MFJ-1910 33' fiberglass telescoping mast, and a custom clipboard. Tom's station was his Elecraft KX2 and LnR EFT-Trail-Friendly end-fed wire supported by a convenient tree. Because of the temperature (30°F), Eric and Tom chose to set up the transceivers in the McFadden van. For this operation, Eric powered his transceiver with the van's accessory power socket. Eric and Tom included bandpass-filters in their stations to eliminate interfering with each other. Eric and Tom were on the air by 1443 UTC.

Tom operated 40m SSB and quickly made enough QSOs to validate his activation.

Eric began operating on 20m and his first QSO came at 1451 UTC with ON7NQ in Belgium. Eric took this as a sign that 20m band conditions were good but then struggled to make four more 20m QSOs. His fifth QSO on 20m came at 1505 UTC with NA6L. Tom having finished on 40m, Eric switched to 40m and made his first QSO there at 1511 UTC. Eric's fifth QSO on 40m and final QSO came at 1517 UTC with K0BAK. All of Eric's QSOs were CW made at the 5-watt level.

Eric recorded an outside temperature of 30°F but after setting up the cold, he, Miles, and Tom remained comfortable inside the van during the operation.