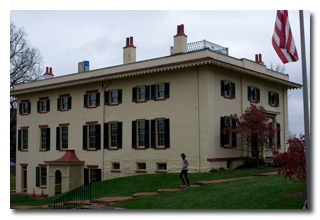 Upon arriving at the park, Eric spoke with the rangers and stamped his Passport 2016. Eric was given permission to set up in the overflow parking area behind the historic Taft house and Education Center.

As at previous activations, Eric's station consisted of his Enhanced KX3 Travel Kit, his MFJ-1910 33' fiberglass telescoping mast, and a custom clipboard. Eric and Miles quickly erected the mast, deployed the antenna, and set up the rest of the station, and Eric was on the air by 1618 UTC.

Because it was CQ World Wide CW weekend, Eric operated only on 30m. His first QSO came at 1622 UTC with K9YKL. Signals were relatively weak and there was a high noise level but QSOs came slowly yet steadily until Eric's 13th QSO came at 1641 UTC with N5KEP. All QSOs were made at the 5-watt level.

A highlight of the operation was having another eyeball-QSO with Hank Greeb, N8XX, who arrived at the site for his own activation as Eric was finishing up his operation.