The group arrived at the park at about 1345 UTC after a departure from Athens almost three hours prior. Eric had exchanged emails regarding the proposed activation with a park staff member and the ranger on duty quickly agreed to allow the activation and directed Eric and Miles to the overflow parking lot and grassy area behind the historic Taft house and Education Center. Eric took the opportunity to stamp his Passport 2016 before he and Miles proceeded to set up.

As at previous activations, Eric's station consisted of his Enhanced KX3 Travel Kit, his MFJ-1910 33' fiberglass telescoping mast, and a custom clipboard. Two small hexagonal picnic tables were available in the grassy area and Eric chose one to operate from and secured Kate's dog, Bo, to the other. (During the set-up, operation, and tear-down Vickie, Kate, and Carol toured the Taft house, leaving Eric and Miles with the dog.) Being well practiced in the task, Eric and Miles quickly erected the mast, deployed the antenna, and set up the rest of the station, and Eric was on the air by 1412 UTC. 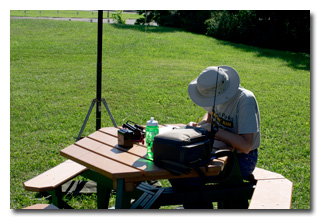 Eric operated only CW on 40m. His first QSO was with W9OA/9 at 1415 UTC. QSOs came almost continuously until Eric's twenty-first and final QSO with NJ3K at 1442 UTC. Had Lunken Field and the B-17 not been calling, Eric would have enjoyed operating for a longer period and he's certain many more Chasers could have been worked. All QSOs were made at the 5-watt level.

As at previous activations, the components making up the Enhanced KX3 Travel Kit worked extremely well. The KX3 transceiver worked flawlessly and the antenna set-up and tear-down went very quickly and the antenna itself allowed easy QSOs with stations all over the eastern half of the United States.

A highlight of the operation wasn't actually part of the radio operation—it was seeing Aluminum Overcast fly over the park.

The women returned from the tour of the Taft house as Eric and Miles were tearing down the station. Because of the desire to see Aluminum Overcast and other warbirds at Lunken Field, Eric chose not to tour the Taft house himself this visit. He's hopeful he'll have another opportunity to activate the site this year and will tour the house at that time.