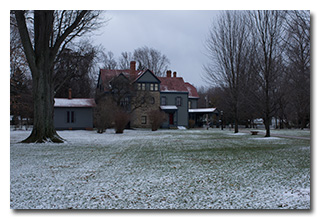 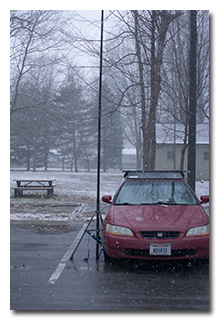 Because of the cold temperature, Eric chose to operate within the car which he parked at one of the parking lot, with the 28½'end-fed wire antenna supported by the 33' fiberglass mast; unlike at most previous operations, Eric strapped the mast tripod to the front wheel of the car instead of securing it to the ground using spikes. Eric was on the air by 1852 UTC.

Eric began operations on 20m and his first QSO came at 1856 UTC with NO2D. Despite having to change frequency to avoid QRM, QSOs came steadily on 20m and Eric's 12th QSO came at 1908 UTC with CU3AA. Eric changed frequency on 20m to work N6YEU who was activating Point Reyes National Seashore (SS10). Eric then changed to 40m and his first QSO there came at 1914 UTC with KA3SJK. QSOs on 40m came quickly with Eric's 26th and final QSO coming at 1931 UTC with K4DJ. All of Eric's QSOs were CW made at the 5-watt level.