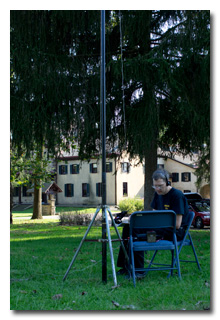 The pair arrived at the Friendship Hill at about 1745 UTC. Eric had already stamped his Passport 2016 at Fort Necessity earlier in the day but he spoke with the ranger who gave him permission to set up pretty much anywhere he wanted. (She also told Eric that most activators this year had operated from their cars in the parking lot.) Eric and Miles did a little bit of a survey and decided to set up in the shade of two trees, near where the gardener's house had originally stood.

As at previous activations, Eric's station consisted of his Enhanced KX3 Travel Kit, his MFJ-1910 33' fiberglass telescoping mast, and a custom clipboard. Eric was on the air at 1816 UTC.

Eric operated only on 40m and his first QSO came quickly at 1619 UTC with K8RAT. QSOs came steadily until Eric made his 12th and final QSO at 1835 UTC with N4HVB. Eric would have liked to operate longer but wanted time to tour the Gallitin House and he and Miles still had a 3½-hour drive home yet to accomplish. All of Eric's QSOs were CW and were made at the 5-watt level.

In addition to the lovely mid-October weather and colorful fall foliage, highlights of the operation were QSOs with friend Ted, W8KVK, and friend and fellow SEORAT-member Mike, K8RAT.

Miles did not operate but helped Eric with set-up and tear-down and did almost all of the activation photography.

After tearing down the station, Eric and Miles completed a tour of the historic Gallitin House.