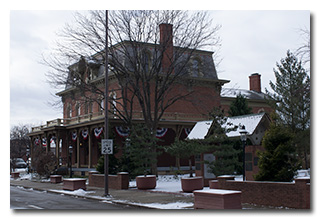 Upon arriving at the site, Eric and Miles stamped Eric's Passport 2016 and spoke with the staff who gave the pair freedom to set up in either of the two parking lots. Eric chose to set up in the overflow parking lot, adjacent to the Saxton McKinley House. 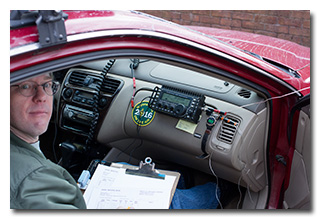 Eric's HF station was his Enhanced KX3 Travel Kit and a custom clipboard. Because of the cold temperature Eric decided to operate inside the car. Because of the wind, Eric chose to hang his antenna from a handy tree. Eric was on the air by 1617 UTC.

Eric had planned to begin operations on 20m CW but discovered high noise levels on that band and quickly switched to 40m. His first QSO on 40m came at 1620 UTC with K8RAT. QSOs came continuously with Eric making his 34th QSO at 1645 with WK2S who was activating Paterson Great Falls National Historical Park (HP34). Eric then switched frequency in order to work K4MI who was activating the George Washington Birthplace National Monument (MN38) / Captain John Smith Chesapeake National Historic Trail National Historic Trail (TR21) two-fer. All of Eric's QSOs were made at the 5-watt level.

Eric would have liked to operate longer but with two more activations planned for the day he and Miles needed to hit the road and head north.