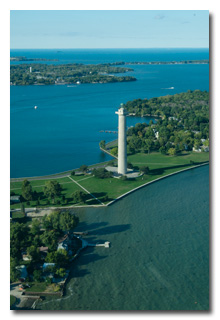 Low ceilings delayed the VFR departure from Newark/Heath Airport until about 1430 UTC. After "scud running" through slowly clearing skies, the trio landed on South Bass Island about an hour later. After arranging to rent a golf-cart and drive the one mile to the Monument, Eric stamped his Passport 2016 and spoke to the park staff who (figuratively) bent over backwards to accomodate the activation. Eric chose to set up near the Visitor Center's back porch, in direct view of the impressive 352' tall Perry's Victory and International Peace Monument.

The park staff provided a folding table and three comfortable chairs. As at previous activations, Eric's station consisted of his Enhanced KX3 Travel Kit with a new 28½' end-fed wire and three new 17' radials, his MFJ-1910 33' fiberglass telescoping mast, and a custom clipboard. Eric was on the air by 1645 UTC. 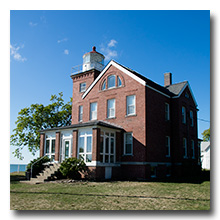 Neither Miles nor Tom operated. Miles helped with set-up and tear-down and did much of the activation photography.

Following the operation, the park staff graciously allowed Eric to stow his gear in a closet in the visitor center. The trio then watched the short movie about the War of 1812's Battle of Lake Erie, found lunch in a lakeside restaurant, and then ascended the Perry's Victory and International Victory Monument to to enjoy the view under the now-beautiful sky from atop the 352' tall Doric column. After collecting the gear, the trio then explored more of the island in the golf-cart and even found and photographed the 1897 South Bass Island Lighthouse and Keeper's Dwelling before returning to airport and flying south again back toward home.