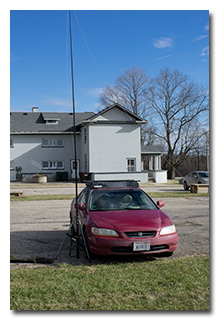 As at previous activations, Eric's station consisted of his Enhanced KX3 Travel Kit, his MFJ-1910 33' fiberglass telescoping mast, and a custom clipboard. Because of the cold temperature, Eric chose to operate inside the car and he chose to power the transceiver using the car's power socket instead of his 5aH gel-cell. Because of the wind, Eric chose to extend the 33' only about halfway and deploy the 28½' wire as an inverted-vee. Eric was on the air at about 1715 UTC.

Eric started operating on 20m and his first QSO there came almost immediately at 1717 UTC with KA7T. QSOs on 20m came steadily with Eric's 8th QSO on 20m coming at 1731 UTC with WA5DTK. Eric changed to 40m and his first QSO there came at 1736 UTC with N8XX who doing one last activation of North Country National Scenic Trail (TR04) in Michigan. QSOs on 40m came continuously with Eric's 38th and final QSO coming at 1809 UTC with K9KSG. All Eric's QSOs were made at the 5-watt level.