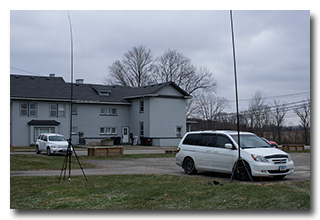 As at previous activations, Eric's station consisted of his Enhanced KX3 Travel Kit, his MFJ-1910 33' fiberglass telescoping mast, and a custom clipboard. Tom's station consisted of his Elecraft KX2 and LnR EFT Trail-Friendly end-fed wire supported as an inverted-vee by a 20' telescoping fiberglass mast. Because of the bitterly cold temperature (22°F), Eric and Tom chose to operate inside the McFadden van. Eric and Tom were on the air about 1655 UTC. 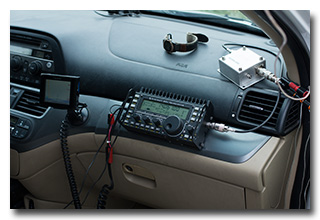 Tom operated only SSB on 40m and quickly made fourteen QSOs and relinquished the band to Eric. Eric started operating on 20m and made his first QSO came at 1659 UTC with N0AIE. QSOs came steadily and about the time Tom gave up 40m, Eric already had close to his ten required QSOs so elected to stay on 20m. Eric's 11th and final QSO came at 1711 UTC with W7AVD. All of Eric's QSOs were CW at the 5-watt level. Both Tom and Eric used bandpass-filters to prevent interfering with each other.

Eric recorded an outdoor temperature of 22°F but the temperature inside the van was comfortable.

Because the finishing-time at Charles Young Buffalo Soldiers National Monument was critical to allow another activation at the same unit the following day, Eric and Tom were done with Eric's 1711 UTC QSO.

Miles did not operate but was instrumental in set-up and tear-down.