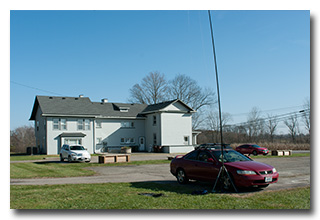 As at previous activations, Eric's station consisted of his Enhanced KX3 Travel Kit, his MFJ-1910 33' fiberglass telescoping mast, and a custom clipboard. Because of the cool temperature, Eric chose to operate inside the car.

As Eric was setting up his station and after he had erected his mast, a staff member came out at the request of the park superintendent to tell Eric that no stakes were to be driven into the park park yard, so Eric had to drop his mast and pull the the stakes that were securing his tripod. Eric already knew that the park trees were off limits. After several minutes of puzzling over alternatives, Eric was able to secure his tripod to the front wheel of his car using a pair of ratcheting tie-downs (photo). (Eric carries several such ratcheting tie-downs in his car in case he needs to strap something to the car's Thule roof rack.) Eric finished setting up his station and was on the air at 1722 UTC.

Because it was CQ World Wide CW weekend, Eric began operations on 30m but made only one QSO there after twelve minutes of calling "CQ". His sole 30m came at 1735 UTC and was with WK2S. Eric switched to 40m and his first contact there came at 1742 UTC with NI0C. QSOs came steadily if not quickly and Eric's 17th and final QSO came at 1801 UTC with KR9L. All QSOs were CW at the 5-watt level.

Eric recorded an outdoor temperature of 44°F but the temperature inside the car was quite comfortable.