The four arrived at the park at about 1650 UTC. It not being a weekend, the park was closed and no staff was present.

As at previous activations, Eric's station consisted of his Enhanced KX3 Travel Kit, his MFJ-1910 33' fiberglass telescoping mast, and a custom clipboard. In order avoid direct sun, Following the hassle encountered at the last activation at his site (link) Eric chose to not set up under any of the trees on-site. Eric was on the air by 1702 UTC.

Following the trouble he had with his Hamstick dipole at the previous activation of the day, Robert chose to operate his Argonaut V station into a 20m Hamstick mounted on the roof of the McFaddens' van. Once he discovered a bad stinger, Robert swapped his first Hamstick for his second and he was ready to start making contacts about the same time Eric was. Robert installed a 20m bandpass filter between his rig and antenna. 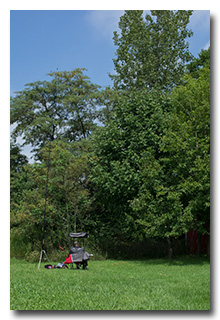 Jeff chose to set up near—but not under!—the mulberry tree. His station consisted of his ICOM IC-706MKIIG transceiver, LDG autotuner, and 28' end-fed wire with three radials. He was quickly read to start making contacts.

Because the other two operators were going to run SSB, Eric chose to start on 30m CW. He quickly discovered that even though Jeff was running through a bandpass filter, Jeff's 70w output was suffificiently strong to completely desense Eric's KX3. Eric's first QSO was was with N5EIL at 1712 UTC. Eric blundered through one more QSO, fighting the desense, before deciding to swap his 28' end-fed wire antenna for his 44' speaker-wire doublet in the hopes this would reduce the interference. With the help of Miles, Eric managed to get the antenna swapped in about twenty minutes and returned to the rig to resume operations on 30m. The interference from Jeff was, indeed reduced to undetectable levels, but now Robert's 20m signal caused severe "duck"-noise on Eric's 30m frequency. Eric's first QSO on 30m with the doublet was with WU5M at 1747 UTC and he managed an additional six QSOs on 30m before Jeff finished his 40m operation. Eric changed to 40m but his CQs failed to bring a single QSO. When Jeff finished on 20m, Eric switched to 20m to finish his activation. Eric's first 20m QSO was with K0BJ at 1825 UTC and his 13th and final QSO was with KT1K at 1828 UTC. All QSOs were made at the 5-watt level. (Eric began to think that he really needs to buy a 30m bandpass filter!)

Robert operated only 20m SSB at 12-watt level. He found the 20m Hamstick vertical mounted on the roof of the van to be a better than the Hamstick dipole had been a the day's previous activtion. Robert had no trouble making more than the ten QSOs required to validate his activation.

Jeff operated SSB on 40m at about the 70-watt level. Using his 28' end-fed wire with three radials, he had no trouble making significantly more than the ten QSOs required to validate this, his second, activation.

Miles did not operate but helped all three of the others with set-up and tear-down and he did nearly all of the activation photography.

After tear-down, the group proceeded to for the third activation of the day, an operation at the Huffman Prairie Flying Field Interpretive Center for the Dayton Aviation Heritage National Historical Park (HP11) + North Country National Scenic Trail (TR04) two-fer.