The pair arrived at the park at about 1600 UTC. The park volunteers were leaving for lunch just as Eric and Robert arrived. Being unable to speak with the staff, Robert proceeded to set up the ARRL NPOTA banner borrowed from Hopewell Culture National Historical Park before he and Eric began setting up their stations. 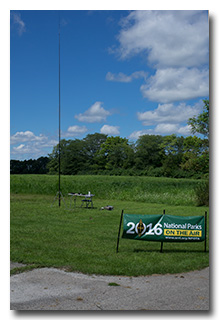 As at previous activations, Eric's station consisted of his Enhanced KX3 Travel Kit, his MFJ-1910 33' fiberglass telescoping mast, and a custom clipboard. In order avoid direct sun, Eric began to set up his station in the shade of the mulberry tree he had operated under previously but before he able to finish, the park superintendant arrived at the site and asked Eric to move his station well away from the tree. Eric moved the station into the clear and was on the air by 1629 UTC.

Robert chose to operate his Argonaut V station on the tailgate of his Isuzu Rodeo, using a Hamstick 20m antenna on the roof of the Rodeo as his antenna. Robert was ready to be on the air about the same time as Eric.

Robert operated only 20m SSB at 12-watt level. As at the previous activation of the day, Robert had no trouble making more than the ten QSOs required to validate his activation.

Eric had chosen not to install a bandpass filter in his station but Robert did install his Dunestar 20m bandpass filter between his rig and antenna. Both operators found that the single bandpass filter was sufficient to prevent interference from bothering either station.