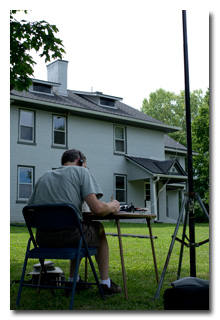 The pair arrived at the park at about 1900 UTC. The park was open and staffed by one of the volunteers who Eric met during his previous activation of the site so Eric was able to stamp his Passport 2016.

As at previous activations, Eric's station consisted of his Enhanced KX3 Travel Kit, his MFJ-1910 33' fiberglass telescoping mast, and a custom clipboard. To avoid direct sun, Eric chose to set up in the shade of a large tree and was on the air by 1920 UTC.

Eric operated CW on 40m. His first QSO was with N1AW at 1926 UTC. Propagation was poor with rapid and deep QSB but QSOs came steadily until Eric's 18th and final QSO with KG4W at 1949 UTC. All QSOs were made at the 5-watt level.