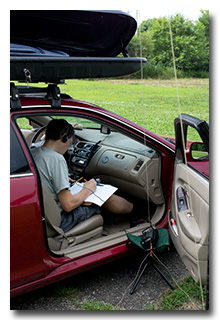 The pair arrived at the park at about 1500 UTC, a bit earlier than had been planned. The park was actually open and staffed by three volunteers who were very interested in what Miles and Eric were doing.

As at previous activations, Eric's station consisted of his Enhanced KX3 Travel Kit, his MFJ-1910 33' fiberglass telescoping mast, and a custom clipboard. The sky being slightly threatening, Eric chose to set up in the car and was on the air by 1515 UTC.

Eric operated CW on 40m. His first QSO was with WT8C at 1532 UTC. Thereafter, QSOs came very steadily until Eric's 16th and final QSO with KI4EZC at 1545 UTC. All QSOs were made at the 5-watt level.