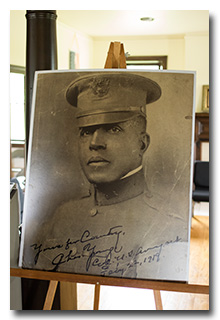 The family arrived at the park at about 1719 UTC, a bit later than had been planned. Thinking the park was closed, Eric and Miles set up his station under the same mulberry tree Eric had used last time. (Eric had stamped his Passport 2016 at the Hopewell Culture National Historical Park activation earlier in the day.)

As at previous activations, Eric's station consisted of his Enhanced KX3 Travel Kit, his MFJ-1910 33' fiberglass telescoping mast, and a custom clipboard. He was on the air at 1719 UTC.

Eric operated CW on 40m. His first QSO was with WN9U at 1721 UTC. Thereafter, QSOs came steadily until Eric's 16th and final QSO with AW0JCO at 1739 UTC. All QSOs were made at the 5-watt level. A highlight of the activation was working fellow Athenian Walt, WT8E.

Miles did not operate but helped Eric with set-up and tear-down and did most of the activation photography. Neither Vickie nor Kate operated.

As Eric and Miles were taking down the station, they were surprised when a park volunteer came over to see what had been going on. It seems that on this occasion, the Charles Young house was, indeed, open. The volunteer was unfamiliar with NPOTA but didn't have a problem with it and offered to give the family a tour of the Charles Young house, an offer the family accepted.