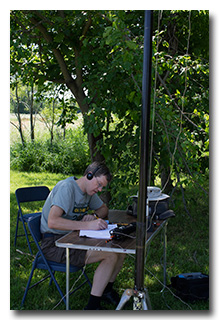 The family arrived at the park at about 1935 UTC. The park being closed, there were no rangers to speak to. Eric had stamped his Passport 2016 at the Hopewell Culture National Historical Park activation earlier in the day.

As at previous activations, Eric's station consisted of his Enhanced KX3 Travel Kit, his MFJ-1910 33' fiberglass telescoping mast, and a custom clipboard. To protect himself from the direct sun, Eric set up his station under a tree which Vickie later identified as a mulberry tree heavy with fruit.

Miles did not operate but helped Eric with set-up and tear-down and did all of the activation photography. Neither Vickie nor Kate operated.