The trio arrived at the park at about 1910 UTC. The park being closed, there were no rangers to speak to. Eric had stamped his Passport 2016 at the Dayton Aviation Heritage National Pack activation earlier in the day. 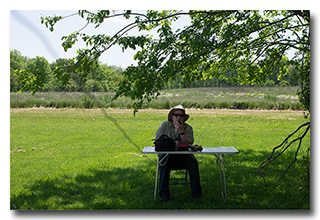 Tom chose a small but handy tree to support his EFT antenna and to provide some shade for himself and his station. Also hoping to avoid sunburn, Eric chose to operate in the van. The pair were on the air at about 1926 UTC.

Eric agreed to give Tom 40m and operated only on 20m. His first QSO was with AE5X at 1928 UTC. Thereafter, it was a continuous pile-up until Eric's 17th and final QSO with W5GAI at 1944 UTC. All QSOs were made at the 5-watt level.

Miles did not operate but helped both Eric and Tom with set-up and tear-down and did much of the activation photography.