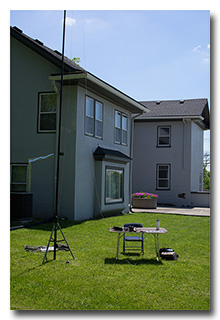 The trio arrived at the park at 1615 UTC. The park being closed, there were no rangers to speak to. Eric had stamped his Passport 2016 at the Hopewell Culture National Historical Park activation earlier in the day.

Eric set up his station in an open area of the yard and he was ready to go on the air about 1636 UTC. 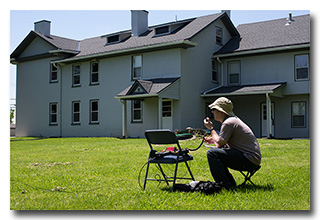 Tom set up his station near a nice tree which he used to support the 44' doublet.

Eric began operations on 40m and his first QSO was with N4TL at 1640 UTC. Thereafter, QSOs came steadily until Eric's 12th QSO with KD4W at 1659 UTC. Just for fun, Eric changed to 20m SSB and made a QSO with Tom. All QSOs were made at the 5-watt level.

Miles did not operate but helped both Eric and Tom with set-up and tear-down and did much of the activation photography.