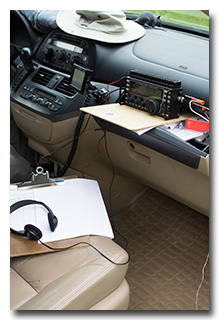 Eric and his family arrived at the park about 1615 UTC. As expected, the Visitor Center was closed but Eric had previously arranged permission for his activation via email. Eric had been able to stamp his Passport 2016 for Charles Young Buffalo Soldiers National Monument at Hopewell Culture National Historical Park during the earlier activation there (link).

Because of the threat of rain, Eric planned to operate in the family van and he was able to find a nice spot on the edge of the parking lot with an adjancent grassy area for the mast and tripod. Once parked, After a quick picnic lunch, Eric and Miles set up the station and Eric was ready to go on the air about 1638 UTC.

Eric began operations on 40m and his first QSO was with W9XX at 1644 UTC. Thereafter, it was a continuous pile-up until Eric's 20th and last QSO with KB8OMG at 1702 UTC. Eric didn't try to make additional QSOs because they had to drive to Dayton for a planned activation of Dayton Aviation Heritage National Historica Park (HP11) later in the afternoon. All QSOs were made at the 5-watt level.

A highlight of the activation was the QSO with Athens-local, WT8E.