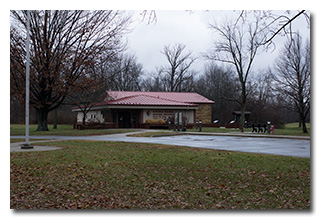 Upon arrival at the Visitor Center, Eric stamped his Passport 2016 and spoke with the ranger who readily gave Eric permission to operate. She also loaned Eric the NPOTA banner to use at his activations over the holiday weekend.

As at previous activations, Eric's station consisted of his Enhanced KX3 Travel Kit, his MFJ-1910 33' fiberglass telescoping mast, and a custom clipboard. Because of the cool temperature, Eric chose to operate inside the car and he chose to power the transceiver using the car's power socket instead of his 5aH gel-cell. Eric was on the air at 1555 UTC.

Eric operated only on 40m and his first QSO came at 1556 UTC with K4EAY. QSOs came continuously with Eric's 18th and final QSO coming at 1611 UTC with W8IQ. All Eric's QSOs were CW were made at the 5-watt level.