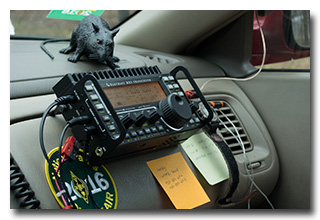 Upon arrival at the Visitor Center, Eric stamped his Passport 2016 and spoke with ranger Rod who readily gave him permission to operate.

As at previous activations, Eric's station consisted of his Enhanced KX3 Travel Kit, his MFJ-1910 33' fiberglass telescoping mast, and a custom clipboard. Because of the cold temperature, Eric chose to operate inside the car and he chose to power the transceiver using the car's power socket instead of his 5aH gel-cell. Eric was on the air at 1445 UTC.

Eric recorded a temperature of 32°F during the operation. Set-up and tear-down were uncomfortably cold but the interior of the car remained comfortable.

The highlight of the operation for Eric was the QSO aat 1517 UTC with KG0YL in North Dakota; this QSO meant Eric had worked all 50 states while operating portable for NPOTA>