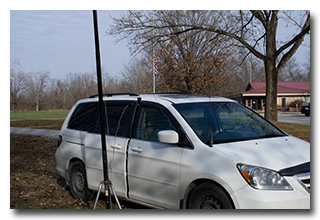 Upon arriving at the Mound City Group, the tri spoke with the ranger and Eric stamped his Passport 2016 with the new "Camp Sherman" version of the Hopewell Culture stamp.

As at previous activations, Eric's station consisted of his Enhanced KX3 Travel Kit, his MFJ-1910 33' fiberglass telescoping mast, and a custom clipboard. Tom's station was his Elecraft KX2 and LnR EFT-Trail-Friendly end-fed wire supported by a convenient tree. Because of the bitter cold temperature (23°F), Eric and Tom chose to operate inside the McFadden van. As he recently discovered was possible in his Honda Accord Coupe, Eric was able to hang his KX3 on the Honda Odyssey's glove box door. Eric chose to power the transceiver using the van's power socket instead of his 5aH gel-cell. Tom powered his KX2 using the transceiver's internal battery. Eric and Tom were on the air at about 1450 UTC.

Tom operated only SSB on 40m and very quickly racked up an impressive 43 QSOs. 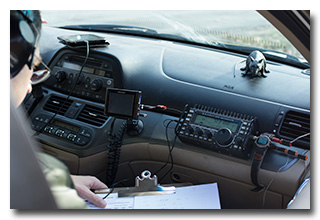 Eric added a 20m bandpass-filter to his station to reject Tom's 40m SSB signal and very slowly made four QSOs on 20m CW. His first QSO on 20m came at 1541 UTC with WS9E and his fourth came at 1504 UTC with K1MRF. Once Tom finished with 40m, Eric removed the 20m bandpass-filter and changed to 40m where he had considerably more success. His first QSO on 40m came at 1518 UTC with K0AWU and his eight QSO on 40m and twelfth overcall came at 1525 UTC with N9ETH. Because an early finish at the following unit was vital to allow an activation there the following day, Eric finished and he and Tom quickly tore down their stations. All of Eric's QSOs were CW made at the 5-watt level.

Eric recorded an outside temperature of 23°F but after setting up in the bitter cold he, Miles, and Tom remained comfortable inside the van during the operation.

Miles didn't operate but helped with set-up and tear-down and did most most of the activation photgraphy.