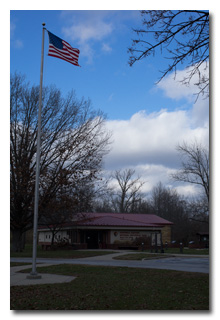 Upon arriving at the Mound City Group, Eric spoke with the ranger and stamped his Passport 2016 with the new "Camp Sherman" version of the Hopewell Culture stamp. Eric declined the kind offer of the use of the NPOTA banner because of the wind and cold.

As at previous activations, Eric's station consisted of his Enhanced KX3 Travel Kit, his MFJ-1910 33' fiberglass telescoping mast, and a custom clipboard. Because of the cool temperature, Eric chose to operate inside the car. Eric had forgotten to bring the regular-sized "navigation" clipboard Eric usually uses in the car's glovebox to support the KX3 but discovered that the KX3 hangs very nicely on the car's closed glovebox. Eric chose to power the transceiver using the car's power socket instead of his 5aH gel-cell. Eric was on the air at 1924 UTC. 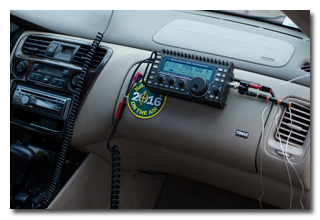 Eric began operations on 40m and his first QSO came at 1926 UTC with N2CX who was activating General Grant National Memorial (NM10) in Manhattan; for this QSO Eric answered N2CX's "CQ". Eric switched to his own 40m frequency and his next QSO came at 1928 with W1PID. QSOs came at a furious pace with Eric's 29th QSO on 40m came at 1949 UTC with K3SVA. Eric took a few minutes to catch up on his logging and then changed to 20m. His first QSO on 20m came at 2000 UTC with K0HNC. QSOs came on 20m quickly with his 10th QSO on 20m and his 39th overall coming at 2009 UTC with W7DFO. All of Eric's QSOs were CW made at the 5-watt level.

Eric recorded an outside temperature of 36°F but he remained comfortable inside the car during the operation. The winds increased throughout the activation until by the time he was finishing up on 20m, Eric was concerned about the well-being of his 33' mast. (The Chillicothe Ross County Airport recorded winds of 16mph gusting to 21mph as Eric was finishing his operation.) Fortunately, the mast survived without damage.