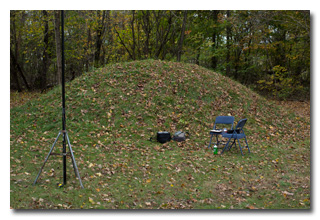 Eric arrived at the Mound City Group at about 1530 UTC to find a nearly-full parking area and a large white tent on the lawn adjacent to the Visitor Center. Eric stampled Passport 2016 and spoke to Ranger Joe Ratermann, learning that the tent and crowd were for a pumpkin-carving event. Ranger Ratermann suggestd a convenient parking place and gave Eric permission to set up anywhere. Eric chose to set up his station near the small mound near the entrance road.

As at previous activations, Eric's station consisted of his Enhanced KX3 Travel Kit, his MFJ-1910 33' fiberglass telescoping mast, and a custom clipboard. Because of gusty winds, Eric chose to extend his fiberglass only partially and his 28½' end-fed wire was more of a sloper than a vertical. Eric was on the air at 1554 UTC.

As Eric was tearing down his station, Ranger Ratermann presented Eric with a "Junior Ranger" badge in honor of the large number of visits Eric had made to the park.

Highlights of the activation were QSOs with IZ8EFD in Italy and with DL2ND in Germany.