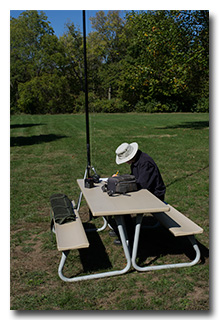 The trio arrived at the Mound City Group at about 1815 UTC. After speaking with the ranger and stamping Eric's Passport 2016, Eric and Miles quickly set up Eric's station at a well-located picnic table in front of the Visitor Center.

As at previous activations, Eric's station consisted of his Enhanced KX3 Travel Kit, his MFJ-1910 33' fiberglass telescoping mast, and a custom clipboard. Eric was on the air at 1834 UTC.

Eric began operations on 40m and his first QSO came at 1835 with NA2X. QSOs came steadily and quickly until Eric made his 12th and final QSO at 1853 UTC with AB0TO. Eric had planned to spend a little time on 20m but found the CW sub-band to too full of contest station and didn't try to make any contacts there. All of Eric's QSOs were CW made at the 5-watt level.