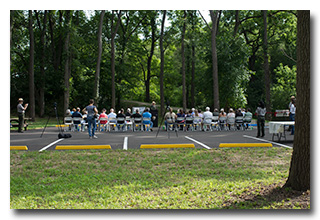 The quartet arrived at the Hopeton Earthworks at about 1310 UTC and were directed by the rangers where to park. The four also confirmed that the desired operating locations were acceptable. 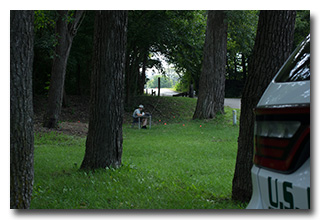 Eric's station was his now-standard NPOTA station: his Enhanced KX3 Travel Kit, his MFJ-1910 33' fiberglass telescoping mast and tripod, and a custom clipboard. Eric chose to set up in the shade of a beautiful, large, walnut tree. Eric enlisted the aid of Miles in throwing a line over a handy branch and used the line to pull up his 28' end-fed wire and was on the air by 1344 UTC.

Robert's station consisted of a his Argonaut V transceiver, an LDG autotuner, and a Hamstick-dipole for 20m mounted on about 10' of PVC mast supported by a rooftop-tripod. Robert installed a 20m bandpass filter between his rig and ATU.

This was Jeff's first NPOTA activation but he has experience with field operations through the U.S. Islands Award Program (link) and the PCARS Ohio State Parks on the Air (link). For this activation, Jeff used his tried-and-true ICOM IC-706MKIIG transceiver and LDG autotuner but this time Jeff tried a new antenna, a 28' end-fed wire supported on a 33' MFJ-1910 fiberglass telescoping mast held erect in a rooftop-tripod; Jeff deployed three 17' radials on the ground. Jeff installed a 40m bandpass filter between his rig and and ATU.

Because the other two operators were planning to run SSB, Eric chose to start operating CW on 30m. Eric doesn't have a 30m bandpass filter but for this deployment, interference from the other two stations wasn't a problem. Eric's first QSO was with K0BJ—a callsign he would see three more times before the end of the day—at 1357 UTC. The noise-floor on 30m was very low but signals were almost uniformally very weak. Eric made his 8th QSO on 30m, with W0YJT, at 1422 UTC but thereafter was unable to make another QSO on 30m. Seeing that Robert had finished on 20m SSB, Eric switched to 20m CW and made three more contacts, finishing with is 11th QSO at 1437 UTC with VE6UX. All QSOs were made at the 5-watt level. 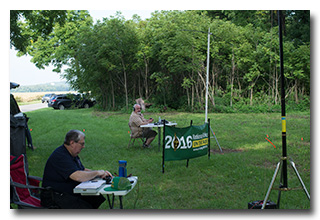 Jeff started running his full 100w on 20m but after learning he was causing interference in Robert's receiver, Jeff dropped his output power to about 50w. At this power level, Robert no longer had interference from Jeff. Running 50w SSB, Jeff had a pretty easy time racking up significantly more contacts than the ten required to validate his first activation. He was quite pleased with how well his new 28' end-fed wire antenna and plans to use it for other NPOTA activations and U.S. Islands qualifications.

Robert's LDG ATU had trouble finding a match for his Hamstick dipole on 20m but Robert was able to match the antenna using a manual antenna tuner. (Robert later found that one of the Hamsticks has a faulty stinger and wouldn't resonate even as a mobile-vertical.) Using the Hamstick dipole, he found 20m almost dead and QSOs were almost impossible to make. Once Jeff finished his run on 40m, Robert switched to Jeff's rig and and antenna and was able to easily make more than the ten QSOs required to validate his activation.

Miles did not operate but helped all three operators with set-up and tear-down and did almost all of the activation photography.

Being busy running CW on 30m, Eric did not hear any of the Hopeton Earthworks opening ceremony but he understands that the key speaker did mention the NPOTA operations. The staff was very pleased at having the NPOTA operations on-site and at least one participant spoke with Jeff following the end of the ceremony.

Following the successful activations, the four went to the Mound City Group Visitors Center to stamp their copies of Passport 2016 before proceeding to Charles Young Buffalo Soldiers National Monument (MN18) for the second activation of the day.