The pair arrived at the Mound City Group at about 1330 UTC. Eric stamped his Passport 2016 and spoke with rangers before he and Robert set up their stations.

Eric's station was his now-standard NPOTA station: his Enhanced KX3 Travel Kit, his MFJ-1910 33' fiberglass telescoping mast and tripod, and a custom clipboard. In order to avoid direct sun, Eric chose to set up in the shade of a large tree and was on the air by 1356 UTC. 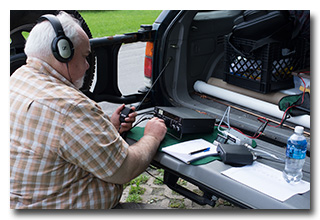 Robert chose to set up his Ten-Tec Argonaut V station on the tailgate of his Isuzu Rodeo and, for the sake of simplicity, chose to use a Hamstick antenna on the roof of the Rodeo. His station was set up and he was ready to be on the air about the same time Eric was.

Eric operated only on 40m CW and his first QSO was with NE4S at 1402 UTC. Except for a sixteen minute dead-period in the middle, QSOs came easily. Eric's twelfth and final QSO was with KE3MX at 1434 UTC. All of Eric's QSOs were made at the 5-watt level.

Robert operated only 20m SSB at the 12-watt level. Robert easily made more than the ten QSOs required to validate his activation even using low power and the compromise antenna. Since his last activation, Robert had managed to find the mic-gain sweet-spot although the setting remained touchy—too low and he has too little transmit audio; too high and his transmit audio badly distorts.

Because of interference issues experienced the last times Eric and Robert operated together (links: TR04, June 11 | HP15, June 11), Eric and Robert both used bandpass filters between their rigs and antennas, and they found that these filters made a great difference. Neither heard any trace of the other station in his receiver. As a test, Eric removed the bandpass filter from his rig and found that Robert's 20m bandpass filter was sufficient to prevent any trace of Robert's signal from being audible in Eric's receiver. Eric does have concerns about placing the bandpass filter at the output of his internal antenna tuner and will research to see if this placement is OK.

Because Eric and Robert were doing three additional activations that day and were returning to Hopewell Culture National Historical Park to do activations in association with NPS Founders Day, the park staff graciously allowed them to borrow the ARRL NPOTA banner.