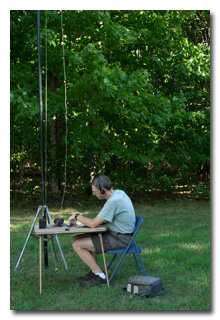 The pair arrived at the Mound City Group at about 2135 UTC after performing a site-survey of the not-yet-open Hopeton Earthworks for a future activation.

Eric's station was his now-standard NPOTA station: his Enhanced KX3 Travel Kit, his MFJ-1910 33' fiberglass telescoping mast and tripod, and a custom clipboard. In order to avoid direct sun, Eric chose to set up in the shade of a large tree. In setting up the station, Eric discovered that his 28' end-fed wire had become intermittent at the banana plug but he was able to make a quick field-expedient repair and was on the air by 2148 UTC.

Eric had intented to start operations on 40m but discovered the North American QSO Party (NAQP) was in full swing and taking up much of the CW sub-band on 40m so he switched to 20m. His first QSO was with K6UF in California at 2150 UTC. QSOs came slowly on 20m and Eric made four QSOs on 20m before switching to 40m. Eric was forced to move quite far up the band to find a quiet spot. Eric's first QSO on 40 (and fifth overall) was with N2SQW at 2214. Propagation was poor on 40m, with sudden and deep QSB but Eric managed to work six more stations running his frequency before resorting to hunt-and-pounce and working three stations participants in the NAQP. Eric's 12th and final QSO with W2EG at 2227 UTC. All of Eric's QSOs were made at the 5-watt level.