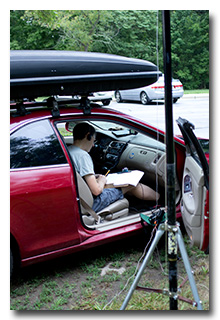 The pair arrived at the park at about 1315 UTC, somewhat later than had been planned. While Eric stamped his Passport 2016 and spoke with rangers, Miles collected the NPOTA banner.

Eric's station was his now-standard NPOTA station: his Enhanced KX3 Travel Kit, his MFJ-1910 33' fiberglass telescoping mast and tripod, and a custom clipboard. Because of the threat of rain Eric chose to set up on the edge of the turn-around and operate inside the car. Eric was on the air by 1338 UTC.