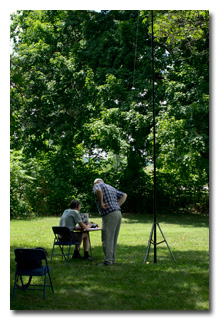 The trio arrived at the park at about 1710 UTC, somewhat later than had been planned. Eric stamped his Passport 2016 and spoke with rangers. The NPOTA banner was unavailable for this activation but the rangers gave Eric ARRL hand-outs for him to make available at the operating location.

Eric's station was his now-standard NPOTA station: his Enhanced KX3 Travel Kit, his MFJ-1910 33' fiberglass telescoping mast and tripod, and a custom clipboard. Eric chose to set up in the shade of a large tree and was on the air by 1727 UTC.

Eric operated only CW on 40m and his first QSO was with K4XO at 1731 UTC. QSOs came slowly but steadily until Eric's 15th and final QSO with KR0P at 1752 UTC. All of Eric's QSOs were made at the 5-watt level.

Although he was offered a rig, Mike chose not to operate during this activation but did use his smartphone to keep Eric current on the spotting network.

Miles did not operate but helped Eric with set-up and tear-down and did nearly all of the activation photography.

After tear-down, the trio toured the touring display of NPS posters by American Modernist artist Charley Harper in the Visitor Center (link).