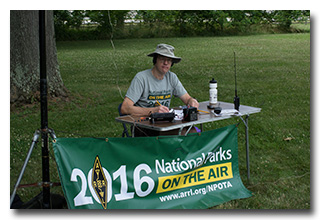 Eric's station was his now-standard NPOTA station: his Enhanced KX3 Travel Kit, his MFJ-1910 33' fiberglass telescoping mast and tripod, and a custom clipboard. Eric chose to set up in the shade of a large tree and was on the air by 1538 UTC.

Miles did not operate but helped Eric with set-up and tear-down and did all of the activation photography. Neither Vickie nor Kate operated.