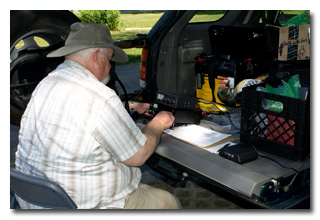 Because of the record-breaking heat and intense sunshine, the duo chose to set up under the cover of dense trees along the periphery of the parking-circle. Robert chose to set up his station on the lowered tailgate of his Isuzu Rodeo. As at the previous activation of the day (link) Robert's station consisted of his Argonaut V transceiver, an LDG Z-817 ATU, and his W4KGH 80m-10m end-fed wire antenna. Robert also deployed a 20m Hamstick on a mag-mount on the roof of the Rodeo for comparison purposes and used a Ten-Tec desk mic instead of the possibly-ailing hand-mic.

Eric's station was his now-standard NPOTA station: his Enhanced KX3 Travel Kit, his MFJ-1910 33' fiberglass telescoping mast and tripod, and a custom clipboard.

Before either attempted to make QSOs, Eric listened to Robert transmit with both the Ten-Tec hand-mic and the desk-mic. The hand-mic sounded like it might be picking up RF from the end-fed antenna so Robert chose to operate with the desk-mic.

Eric operated primarily CW on 40m and his first QSO was with KT0K at 1823 UTC. Probably because of the poor propagation conditions from the previous day's CME-event, Eric had to work to make the ten QSOs required to validate his activation—it took him half an hour to make the ten QSOs. Eric's tenth CW QSO was with K0FD at 1853 UTC. Eric then switched to 20m SSB to monitor Robert's audio and made a SSB QSO with him at 1927 UTC. All of Eric's QSOs were made at the 5-watt level.

Unfortunately, Robert failed to make the ten QSOs required to validate his activation. His calls of "CQ" went unanswered even with spotting-help from W8KVK and K8RAT. Robert was also mostly unsuccessful in working other NPOTA activators or other special event stations. He tried the W4KGH end-fed antenna, he tried the 20m Hamstick atop the car, and he even tried Eric's 44' speaker-wire doublet which Eric deployed for him after he finished his own operation. As at the previous activation that day (link) Robert found the LDG Z-817 ATU easily matched the W4KGH end-fed on 20m but still produced the puzzling series of blinks when used on 40m. The Z-817 also quickly matched Eric's 44' doublet on 20m but, strangely, produced the same series of blinks when a match was attempted on 40m.

Robert finished the operation with three QSOs at Hopewell Culture, not enough to validate his a activation. However, he did work two NPS units so he did earn two Chaser points during the operation. Robert was disappointed but is still excited about the possibilities of field-operations and further NPOTA activations.