Eric arrived at the park at 1544 UTC to find another school bus and group of students already there. Perhaps Fridays are school-tour days?) Eric stamped his Passport 2016 and spoke with the ranger who again gave Eric permission to set up pretty much anywhere he wanted. The ranger couldn't find the NPOTA banner, saying it hadn't yet been returned from Dayton, so Eric was unable to display it during the operation. (After the operation was over, a second ranger did know where to find the banner; the banner will remain available for use at subsequent activations until it will be sent to another park in July for a special event.) 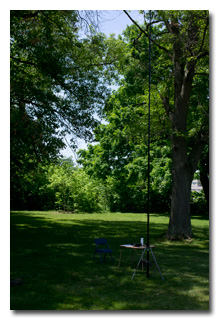 In an attempt to have a bit of shade, Eric set up his station just outside the canopy of a tree and was ready to go on the air about 1601 UTC.

Eric operated only on 40m and his first QSO was with N2AX at 1601 UTC, followed quickly by a QSO with fellow SEORAT K8RAT at 1602 UTC. Thereafter, QSOs came very steadily until Eric's 18th and final QSO with WC0Y at 1619 UTC. All of Eric's QSOs were made at the 5-watt level.

During Eric's operation, a school boy ran over to see what was going on—this was the first time this has happened in any of Eric's activations of Hopewell Culture. Eric was happy to pause during his operation to explain to the boy what was going on.

After Eric took down his station, he ate a quick lunch and then looked at the artifacts in the nice museum and viewed the twenty-minute film on the Hopewell Indian culture.