The trio arrived at the park about 2100 UTC as the ranger was getting into his car; the Visitor Center had closed at 5pm but the park grounds remain open until dusk and the ranger gave permission for the stations to be set up. 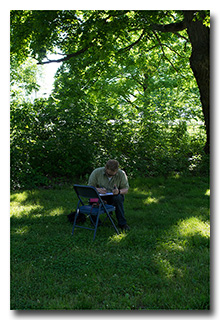 In an attempt to have a bit of shade, Eric set up his station just outside the canopy of a tree and was ready to go on the air about 2114 UTC. Tom set up under a friendly tree which he used for shade and to hang the EFT antenna; he was on the air about the same time as Eric.

Miles did not operate but helped both Eric and Tom with set-up and tear-down and he did most of the activation photography.

(In working through his logs later, Eric found that he had worked AE5X at all three of his activations that day.)