The trio arrived at the park about 1345 UTC. They spoke with the rangers and Eric stamped his Passport 2016. The rangers presented Tom with an ARRL NPOTA lapel pin and a window-cling. Unfortunately, the NPOTA banner had been sent to Dayton for use at a large activation at the Wright-Dunbar Interpretive Center and was unavailable for this activation. 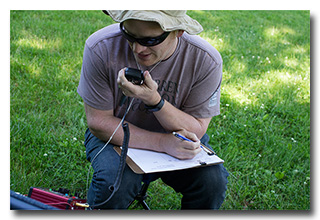 Eric set up the station alongside the parking-lot circle and was ready to go on the air about 1412 UTC. Tom set up under a friendly tree which he used to support the doublet; he was on the air about the same time.

Eric began operations on 40m and his first QSO was with KD0IZL at 1422 UTC. Thereafter, QSOs came steadily until Eric's 15th QSO with KB3VVE at 1433 UTC. Just for fun, Eric then changed to 20m SSB and worked Tom at 1438 UTC. All of Eric's QSOs were made at the 5-watt level.

Miles did not operate but helped both Eric and Tom with set-up and tear-down and he did most of the activation photography.

As at Eric's previous activation of Hopewell Culture NHP, the rangers made the group feel very welcome at the par.