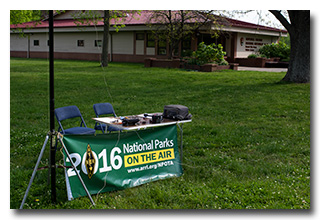 Eric, et al, arrived at the park about 1345 UTC. Eric stamped his Passport 2016 and spoke with the rangers who again allowed him to use their ARRL NPOTA banner and they presented him with a ARRL NPOTA window-cling.

Eric quickly set up the station alongside the parking-lot circle and was ready to go on the air about 1400 UTC. 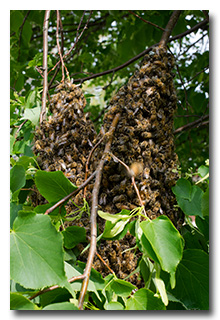 Eric began operations on 40m and his first QSO was with WA3NZR at 1406 UTC. Thereafter, it was a continuous pile-up until Eric's 21st and last QSO with W2NO at 1425 UTC. Eric didn't try to make additional QSOs because they had to drive to Wilberforce for a planned activation of Charles Young Buffalo Soldiers National Monument (MN18) in the early afternoon. All QSOs were made at the 5-watt level.

At some point during the activation, two hams stopped by to see what was going on. They were working the annual Tour of the Scioto River Valley (TOSRV) bicycle-tour from Columbus to Portsmouth and had seen the station as they drove past on SR104. Eric was too busy working stations to talk much but did hear them say they had done a January or February activation at Hopewell Culture NHP.

After transcribing his QSOs to the log-sheet, Eric checked out the swarm of bees in a nearby tree.

As at his previous activation of Hopewell Culture NHP, the rangers made Eric feel very welcome at the park.