One member of the Southeast Ohio Radio Adventure Team succeeded in activating Hopewell Culture National Historical Park as part of the ARRL's year-long National Parks on the Air (link). Eric McFadden, WD8RIF, made a solo trip to Chillicothe to activate the Hopewell Culture National Historical Park, HP15 (link) at the Mound City Group. He was accompanied by his daughter Kate, KD8KNC, and Kate's puppy, Bo. 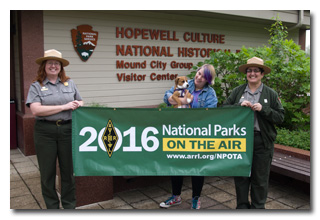 Hoping to beat the rain, Eric and Kate arrived at the Mound City Group about 1430 UTC. After speaking with Rangers Susan Knisley and Nissa Salvan, Eric stamped his Passport 2016 and moved his car so he could operate on the grass alongside the circle near the Visitor Center. Eric secured the park's NPOTA banner to his car, deployed the antenna and, because the skies weren't yet threatening, set up the KX3 on a camp-stool positioned in the open passenger door of his car. 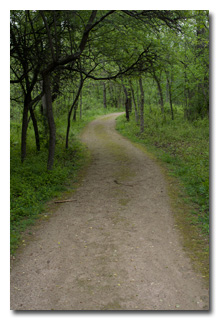 Eric began operations on 20m and his first QSO was with KT0K at 1452 UTC. Thereafter, it was a continuous pile-up until Eric's seventeenth and last QSO with N6YEU at 1509 UTC. About halfway through the operation, the rain began to fall lightly and when Eric noticed moisture wicking behind the KX3's bezel about the same time the pile-up went away, Eric decided against trying for additional QSOs on 20m or moving to 40m. All QSOs were made at the 5-watt level.

After transcribing his QSOs to the log-sheet, Eric removed the bezel from his KX3 so he could thoroughly dry the everything before putting it away. By the time Eric had put the station away and returned the banner to the rangers, the rain had dropped almost completely away and Eric, Kate, and the puppy Bo explored a portion of one of the hiking trails at the Mound City Group.

As at his previous activation of Hopewell Culture NHP, the rangers made Eric feel very welcome at the park and he's looking forward to his next activation at the park on May 7.