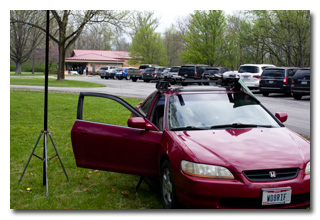 Eric arrived at the Mound City Group about 1345 UTC to find the parking lot full, vehicles parked in the grass, a schoolbus parked in the circle, and dozens of schoolgirls and their teachers in front of the Visitor Center. Fearing he'd be turned away or directed to operate at one of the other Hopewell Culture NHP units, Eric approached one of the rangers who wasn't at that moment dealing with the students. Eric's concerns were unfounded—the ranger warmly greeted Eric, gave him permission to operate at the Mound City Group, gave him permission to park wherever was convenient, and even have him an ARRL National Parks on the Air lapel pin which the park had purchased to thank NPOTA activators. After stamping his Passport 2016 Eric parked his car on the grass along the exit of the circle and began set-up.

The station was to consist of Eric's Enhanced KX3 Travel Kit, his MFJ-1910 33' fiberglass telescoping mast, a custom clipboard, and a camp-stool. 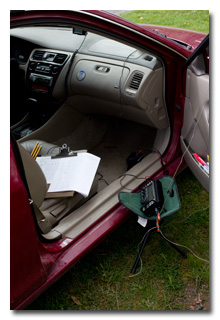 Because of a forecast for rain and even thunderstorms, Eric decided to operate inside his car. The deployment of the 33' mast and the antenna started well enough but somehow the rope and the 28' wire got twisted together and tangled and it took Eric about 15 extra minutes to untangle everything, get the 28' wire in the air, and deploy the three counterpoise wires. While Eric was untangling the mess, a ranger, Joe Ratermann, approached and asked if it was OK if he displayed an official ARRL National Parks on the Air banner near the station—it seems the park rangers are so excited about NPOTA they had purchased this banner to help promote the NPOTA activations! Eric, of course, said it was OK and allowed Mr. Ratermann to secure the banner to the Thule roof-rack atop the car.

The deployment of the KX3 went much more quickly than the deployment of the antenna. Because rain didn't look imminent, Eric chose to place the KX3 in the open door of the car, sitting on a camp-stool, with the intention of pulling the radio into the car if the skies opened.

Eric's began operations on 40m and his first QSO was with N4NQ at 1419 UTC. Thereafter, QSOs came steadily until Eric's twentieth and last QSO a half-hour later at 1449 UTC. With the activation thus validated, Eric didn't attempt operation on 20m.

As Eric was transcribing his first eighteen QSOs to the log, a third ranger, Nissa Salvan, approached and asked if she could take some photos. Eric said yes and while she made her photos, Eric removed his headphones and made his nineteenth and twentieth QSOs with the KX3's internal speaker so she could hear what was actually going on. Ranger Salvan told Eric her father had been a CW operator in the U.S. Army.

All of the rangers made Eric feel very welcome at the park and he's looking forward to his next activation at Hopewell Culture NHP on April 30.

Despite the threatening forecast, the weather was just about perfect for this activation: 63° and only the lightest breeze, with a beautiful sky full of puffy clouds.