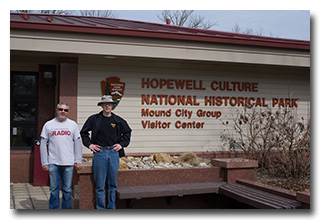 Andy had done the initial legwork to make this activation possible by visiting the park the Monday prior to speak with the rangers and to do a site-survey. The rangers were extremely generous and gave Andy permission to operate anywhere within the park, to hang antennas from the trees, and to power his station with a Honda invertor-generator.

Eric had published that operations were to take place between noon and 3pm local time. The gang arrived at the park about 10:45am and, after scouting for the two best locations, commenced to set up the stations. Both stations were set up in-the-clear in the grassy area immediately in front of the Visitor Center.

Prior to learning that it would, in fact, be permissible to hang wires from the trees, Eric had decided to limit himself to his 28' end-fed wire antenna suspended as a vertical from his MFJ-1910 33' fiberglass mast and he and Miles were able to quickly erect the antenna and set up the KX3 station on a small folding table. In order to qualify for the green-power provision of the Five Star Activator bonus, Eric had previously discharged his 5Ah gel-cell and recharged it using a photovoltaic panel. At the park, Eric powered his KX3 with this 5Ah battery while floating a 5-watt PV panel and Micro-M charge-controller across it to extend battery-life. Eric had brought additional gel-cells and his ten-cell NiMH pack but none of these batteries were needed. Eric used the KX3's electronic memory keyer to send CQ but completed all the QSOs using his Vibroplex bug. 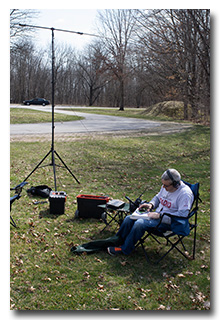 Andy had just taken delivery of a BuddiPole system and was eager to try it out. Andy used his Kenwood TS-480sat transceiver at 100 watts and used Eric's 2kW Honda invertor-generator for power. Andy was unable to tune the Buddipole dipole on 40m, a problem that he later determined to be related to a loose connector, so he concentrated on 20m for almost all of the activation.

While Eric and Andy were setting up the stations, the wind began to pick up dramatically. It got so windy that Eric decided to guy one side of his 33' mast and both he and Andy had trouble dealing with the paper logsheets. About an hour into the operation, the Chillicothe airport was reporting winds of 26mph with gusts to 36mph. The temperature rose from the mid-60s at set-up to 72° during the activation. Eric later made a screen-capture of the airport's "Weather Conditions" website (image).

In all, Andy and Eric operated just about three hours at Hopewell Culture National Historical Park.

Using his own callsign, Andy commenced operations on 20m SSB and had a tough time of it. Whether the Buddipole dipole low to the ground was just not as effective as a full-size wire dipole suspended at 35' from a tree, or propagation wasn't cooperating, or maybe just because it was a weekday, Andy had to fight to make QSOs. By the end of the operation, Andy had one QSO on 2m FM and twenty QSOs on 20m. In order to qualify for the "Share the Mike" provision of the Five Star Activator bonus, Andy managed to persuade his wife, Jennifer, to make some of his final QSOs (photo). Ted Jacobson, W8KVK, has generated a geocoded map of Andy's 20m contacts (link).

While Andy operated on 20m, Eric started on 40m CW using his own callsign. After calling CQ for what seemed like an inordinately long time, Eric began to despair of making the required ten QSOs to validate his activation. Eventually, though, stations began to respond and Eric finished the day with one QSO on 2m FM, twenty-three QSOs on 40m, and thirteen QSOs on 20m for a total of thirty-seven QSOs. Eric has generated a geocoded map of his HF contacts (link).

The rangers at Hopewell Culture National Historical Park could not have been more welcoming and helpful to Andy and Eric. After the activations were over, Andy and Eric thanked the rangers and were able to confirm that subsequent activations of HP15 can be attempted at any of the three open-to-the-public portions of the park (Seip Earthworks, Hopewell Mound Group, and Mound City Group) without first seeking permission from the rangers at the Visitor Center at the Mound City Group.

Despite the gusty wind, both Andy and Eric enjoyed the operation and are already discussing additional activation possibilities!