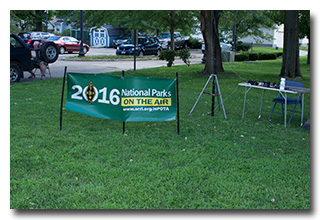 As at previous activations, Eric's station consisted of his Enhanced KX3 Travel Kit, his MFJ-1910 33' fiberglass telescoping mast, and a custom clipboard. He chose to set up in the grassy picnic area behind the Interpretive Center and was on the air by 1840 UTC.

Robert chose to set up his Argonaut V station on the tailgate of his Isuzu Rodeo, and again used a 20m Hamstick antenna on the roof of the truck. Robert deployed the ARRL NPOTA banner borrowed from the staff at Hopewell Culture National Historical Park and was on the air at about the same time as Eric.

Robert operated only 20m SSB and had absolutely no trouble making more than the ten QSOs required to validate his activation. As at the previous activation of the day, the single bandpass filter in Robert's station was sufficient to protect each operator from interference from the other.