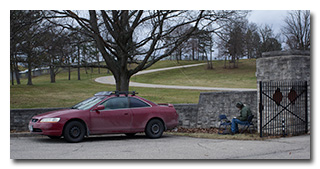 Upon arriving at the Interpretive Center, Eric spoke with the rangers and stamped his Passport 2016. Upon returning to the Memorial Gate, Eric phoned the Wright-Patt security forces to notify them of his activities and then he and Miles set up Eric's station. Eric was on the air by 1911 UTC.

As at previous activations, Eric's station consisted of his Enhanced KX3 Travel Kit and a custom clipboard. Because of the high winds, Eric chose to throw a line over a tree to support his 28½' wire instead supporting it with his 33' mast.

Midway through the operation, it started spitting snow and rain and Eric had to call to Miles to deploy a military poncho as an improvised shelter to protect the logsheets and KX3.

A highlight of the operation was the park-to-park 20m QSO with K0GUZ who was activating Colorado National Monument (MN20). 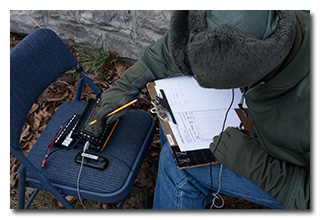 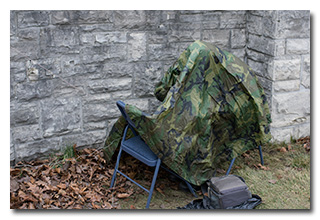