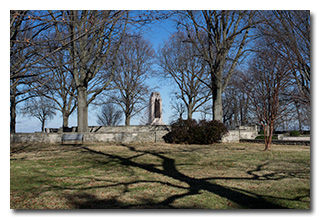 Upon arriving at the Interpretive Center, Eric spoke with the rangers and stamped his Passport 2016. Upon returning to the Memorial Gate, Eric phoned the Wright-Patt security forces to notify them of his activities and then set up his station. Eric was on the air by 1757 UTC.

Eric operated only on 40m and his first QSO came almost immediately at 1758 UTC with W8KYD. QSOs came continuously with Eric's 22nd and final QSO coming at 1818 UTC with WX2S. All Eric's QSOs were CW made at the 5-watt level.

Somewhere in the middle of the activation, the strong winds blew Eric's mast down. Fortunately, it was blown toward Eric, who caught it and held it upright until he could resecure the stakes in the muddy soil.