Upon arriving at the Interpretive Center, Eric and Miles found the gate to the Interpretive Center closed due to icy roads. Eric phoned the Wright-Patterson AFB security forces and received permission to set up and operate just outside the gate. Eric's usual spot just outside the gate was water-logged so he and Miles set up the station on the other end of the gate. To protect his gear and logsheets, Eric operated under an impromptu tent, a military poncho. Eric was on the air by 1824 UTC.

Eric recorded a temperature of 26°F—. Eric's long-johns, scarf, hat, insulated boots, and two layers of gloves with chemical hand-warmers kept him relatively comfortable for the period of the operation. 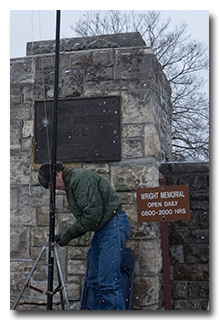 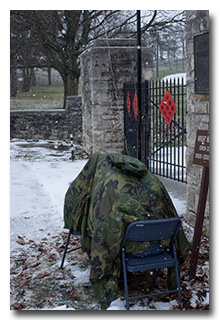